The Swedish Prince, an all-new emotional standalone by Karina Halle is now LIVE! 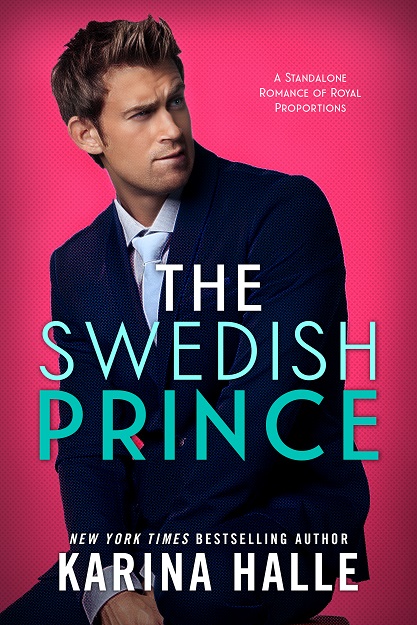 I never believed in fairy-tales.

Never held out for Prince Charming.

Growing up poor in small-town California as the oldest of six siblings, I knew I would never ride off into the sunset with anyone. That was even more apparent when a senseless tragedy took the lives of my parents, forcing me to become the sole guardian of our dysfunctional household at the mere age of twenty-three.

Then a fateful encounter literally brought Prince Charming to my dusty doorstep.

At first I thought Viktor was just your average businessman passing through, albeit obscenely handsome, six-foot-five, blue-eyed, and mysteriously rich.

But soon I discovered the truth behind Viktor’s façade.

Beneath his quiet, enigmatic gaze and cocky charm, is a man who is running away from who he really is. A role he’d rather not fulfill.

He is Viktor of House Nordin, His Royal Highness, The Crown Prince of Sweden.

Yet uncovering Viktor’s secret was only the first step.

I didn’t expect to fall in love with him.

I didn’t expect to have my whole life turned upside down.

When you’re from two different worlds, can your hearts meet somewhere in the middle?

Or do happily-ever-afters only exist in fairy-tales?

The Swedish Prince is a standalone romance inspired by Roman Holiday.

I think Karina Halle has officially broken me. I’ve been trying to write my thoughts on this book since I finished reading it a few hours ago but I can’t find the perfect words so I guess a really short review will do.

Have you guys seen Roman Holiday? If you have and loved it but didn’t love the ending then this book is for you. The Swedish Prince is a modern twist on that story and there’s a plus! The characters get their happily ever after!

Everything about this book is fun and fluffy and romantic. Even the way Maggie and Viktor, our main characters, meet is hilarious — let’s just say one of them is very, very naked and the other is very, very embarrassed. Their relationship is something some people still crave, the whole thing where Prince Charming sweeps you off your feet and suddenly everything is better. I sure wanted that when I was younger and dreamt of kings and queens and castles. It was great to relive that fantasy all over again.

As always, I cannot recommend Karina Halle’s books enough. This book is impossible to put down. I think this is Karina’s longest book to date and somehow it felt like the shortest because I had the best time reading it. And did I mention it is a royal romance?? That’s one of my favorite tropes and if y’all have never read a book about a prince/princess romance then this would be a great book to start with.

Blog Tour: The Wrong Kind of Love by Lexi Ryan (The Boys of Jackson Harbor #1 Review)

This site uses Akismet to reduce spam. Learn how your comment data is processed.